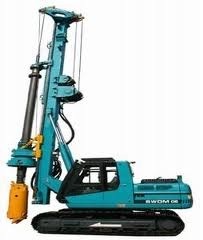 is a mechanical device used to drive piles into soil to provide foundation support for buildings or other structures. The term is also used in reference to members of the construction crew that work with pile-driving rigs.

One traditional type of pile driver includes a heavy weight placed between guides so that it is able to freely slide up and down in a single line. It is placed upon a pile. The weight is raised, which may involve the use of hydraulics, steam, diesel, or manual labour. When the weight reaches its highest point it is then released and smashes on to the pile in order to drive it into the ground.

A modern diesel pile hammer is a very large two-stroke diesel engine. The weight is the piston, and the apparatus which connects to the top of the pile is the cylinder. Piledriving is started by having the weight raised by auxiliary means — usually a cable from the crane holding the pile driver — which draws air into the cylinder. The weight is dropped, using a quick-release. The weight of the piston compresses the air, heating it to the ignition point of diesel fuel. Diesel fuel is added/injected into the cylinder. The mixture ignites, transferring the energy of the falling weight to the pile head, and driving the weight back up. The rising weight draws in fresh air, and the cycle starts over until the fuel runs out or is stopped by the pile crew.

From an army manual on pile driving hammers: The initial start up of the hammer requires the piston (ram) to be raised to a point where the trip automatically releases the piston, allowing it to fall by gravity. As the piston falls, it activates the fuel pump, which discharges a metered amount of fuel into the ball pan of the impact block. The falling piston also blocks the exhaust ports, and compression of fuel trapped in the cylinder begins. The compressed air exerts a pre-load force (approx. 44,000 lbs. or 20,000 kg.) to hold the impact block firmly against the drive cap and pile. At the bottom of the compression stroke, the piston strikes the impact block, atomizing the fuel and starting the pile on its downward movement. In the instant after the piston strikes, the atomized fuel ignites, and the resulting explosion exerts an even greater force on the already moving pile, driving it further into the ground. The reaction of the explosion rebounding from the resistance of the pile drives the piston upward. As the piston rises, the exhaust ports open, releasing the gases and force of the explosion into the atmosphere. After the piston stops its upward movement, it again falls by gravity to start another cycle.

The vertical travel lead, referred to as "VTL" system, was first developed and patented by C.W. Bermingham in the 1970's. This lead system was developed in response to the fundamental limitations of either a fixed lead or swinging lead system. The fixed lead system is well suited to level job sites with few obstructions and has the advantage of faster positioning of the lead. The hanging lead is very adaptable to different elevations and batter piles but takes much longer to position. Therefore the Vertical Travel Lead was developed to combine the advantages of fixed leads, fast and accurate positioning, with the ability to adjust the height of the lead base up or down. The VTL lead is connected to the boom by a sliding connection, which allows the lead to be elevated or lowered below grade.

A hydraulic hammer is a modern type of piling hammer used in place of diesel and air hammers for driving steel pipe, precast concrete, and timber piles. Hydraulic hammers are more environmentally acceptable than the older, less efficient hammers as they generate less noise and pollutants. However, in many cases the dominant noise is caused by the impact of the hammer on the pile, or the impacts between components of the hammer, so that the resulting noise level can be very similar to diesel hammers.

Specialty equipment which installs piles using hydraulic rams to press piles into the ground. This system is preferred where vibration is a concern. There are press attachments that can adapt to conventional pile driving rigs to press 2 pairs of sheet piles at a time. Additional types of press equipment sit on top of existing sheet piles and grip onto previously driven piles. This system allows for greater press-in and extraction force to be used since more reaction force is developed. The reaction based machines operate at only 69dB at 23 ft allowing for installation and extraction of piles in very close proximity to noise and vibration sensitive areas where traditional methods may threaten the stability of existing structures.

Such equipment and methods are specified into portions of the internal drainage system in the New Orleans area after Hurricane Katrina as well as many projects around the world where noise, vibrations and limited access are a concern during the engineering, design and construction phases of the project.

Vibratory pile hammers contain a system of counter-rotating eccentric weights, powered by hydraulic motors, and designed in such a way that horizontal vibrations cancel out, while vertical vibrations are transmitted into the pile. The pile driving machine is lifted and positioned over the pile by means of an excavator or crane, and is fastened to the pile by a clamp and/or bolts. Vibratory hammers can either drive in or extract a pile; extraction is commonly used to recover steel "H" piles used in temporary foundation shoring. Hydraulic fluid is typically supplied to the driver by a diesel engine powered pump mounted in a trailer or van and connected to the driver head through a set of long hoses. When the pile driver is connected to a dragline excavator, it is powered by the excavator's own diesel engine. Vibratory pile drivers are often chosen to mitigate noise, as when the construction is very close to residence or office buildings, or when there is not enough vertical clearance above the foundation to permit use of a conventional pile hammer (for example when retrofitting additional piles to a bridge column or abutment footing). Hammers are available with several different vibration rates, ranging from about 1200 vibrations per minute to about 2400 VPM; the vibration rate chosen is influenced by soil conditions at the site and other factors such as power requirements and purchase price of the equipment.