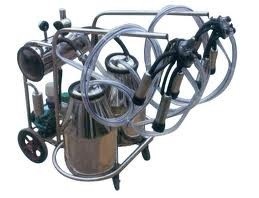 Dairy cattle are milked by machine. Milking machine design and function is critical for rapid and efficient removal of milk without damage to the teat or gland and with minimal risk for transmitting pathogenic microorganisms that might cause mastitis. The only way for mastitis-causing organisms to enter the teat is through the streak canal. This is the same route by which milk leaves the gland, therefore, anytime that the streak canal is opened to remove milk the gland is susceptible to potential intramammary infection.

Milking Machine Vacuum Pump Oil is a high quality vacuum pump oil specially developed for use in milking machines. This oil is formulated from specially selected highly refined mineral oils. Milking machine reliability is of the utmost importance in dairy management and therefore this product has been designed with the following outstanding features.

Much of the recommended process of milking relates directly or indirectly to control and prevention of mastitis. The physical and functional interface between the teat and the machine are carefully designed to minimize the chances of intramammary infection occurring as a result of milking. Although the milking machine may only account for 5-10% of mastitis cases, proper milking machine function must be maintained over time. Incorrect vacuum or pulsator settings or worn teat cup liners all can enhance the role of the milking machine in contributing to intramammary infection.

Teat-end vacuum should be stable and should be approximately 11-12 inches of mercury. Teat end vacuum fluctuations can occur because of several things. Improper vacuum, either because of incorrect vacuum settings, flooded milk lines (see below for high lines), or uneven milkout of quarters, can cause air to leak in between the teat and the rubber liner of the teat cup. This often results in a sucking sound called liner slips. It is not unusual to hear a sucking or squawking noise in any milking operation, but if they are too frequent, it is a sign of something improper in the milking system. The concern about liner slips (liner squawks) with respect to mastitis is that air entering one teat cup can forcefully blow milk from the claw up the other liners and droplet so milk may enter the other teats. This also may occur if the teat cup slips off of one of the teats, or the person putting the machine on the cow allows too much air to be sucked into a teat cup while milk is being removed from the other quarters. If a milk droplet entering another teat is contaminated with a bacterium, then transmission of mastitis-causing pathogens may occur.

The machine includes teat cups that contact the cow’s teats and remove the milk, a claw where milk pools as it is removed from the four teats, vacuum tubes that provide vacuum to the teat cups and a milk tube that removes milk away from the claw, a source of vacuum for the machine, and a pulsator that regulates the on-off cycle of the vacuum. Many milking machines today have an automatic take-off (ATO or detacher) device that removes the machine from the cow when milking is completed. In addition, many milking machine systems are linked to a computer system that both regulates the machine and generates data about the cow and its milk as milking is occurring. The description below is an overview of the milking machine components.